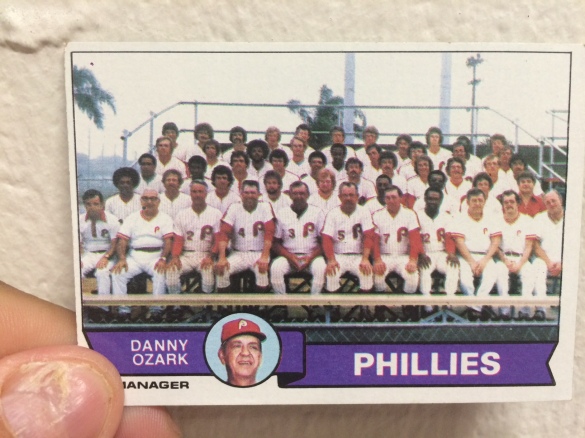 History is so easy to understand in retrospect. The narratives are so clean and the paths to the conclusion seem so obvious. And yet they can only be examined as something that happened in the past. And in many ways, tiny moments where history zigged instead of zagged could change what narrative we all know.

Take the Philadelphia Phillies. They are the last pre-expansion franchise to win the World Series. For the first half of the 20th century, they were the OTHER team in Philadelphia. As the Athletics won pennants and titles in the 1900’s, 1910’s, 1920’s and 1930’s, the Phillies were irrelevant winning two pennants between the 1903 and 1980.

Even when the Athletics left, the Phillies were mainly irrelevant except in 1964 when they had one of the great collapses in baseball history.

The Phillies franchise transformed in the mid 1970’s and by 1976, the won three straight NL East titles. In 1976, they were swept by the unstoppable Reds, so there is no shame in that.

In 1977, the team won 101 games and looked like a pennant winner. A controversial 9th inning in Game 3 of the NLCS against Los Angeles turned a potential 2-1 lead into a 2-1 hole which they lost in Game 4.

This card shows the 1978 squad, who again lost to Los Angeles for the pennant in 4, this time on a walk off single in the 10th.

When they finally won in 1980, as the narrative goes, the Phillies couldn’t win the big game. They were too loose, too cliquey and too disjointed. They needed two key changes. Danny Ozark was the wrong manager and Dallas Green, a “I don’t care what you think of me” hard nosed manager was the right fit. And they needed Pete Rose, the free agent pick up from the Reds who basically taught the Phillies how to win.

Of course had the Phillies won the Game 3 in 1977 or the Game 4 in 1978, they might have won the pennant and the World Series and the narrative would have been Danny Ozark had the right laid back approach.

The narrative would have said they were a close knit team that played off of adversity, because the narrative is always written in retrospect.

This team picture, showing the 1978 NL East Champs does not help their cause, I must say. It is a very strange team picture. No hats, sitting in what looks like a high school bleacher instead of the stadium. Clearly this was taken in Spring Training as there are palm trees in the background. I have been to Philadelphia enough times to know they have a big lack of palm trees there.

So instead of being in rough and tumble Rocky Balboa era Philadelphia, they are seen, caps off, relaxing in Florida.

Maybe the narrative WAS right. Maybe they WERE a little too laid back. 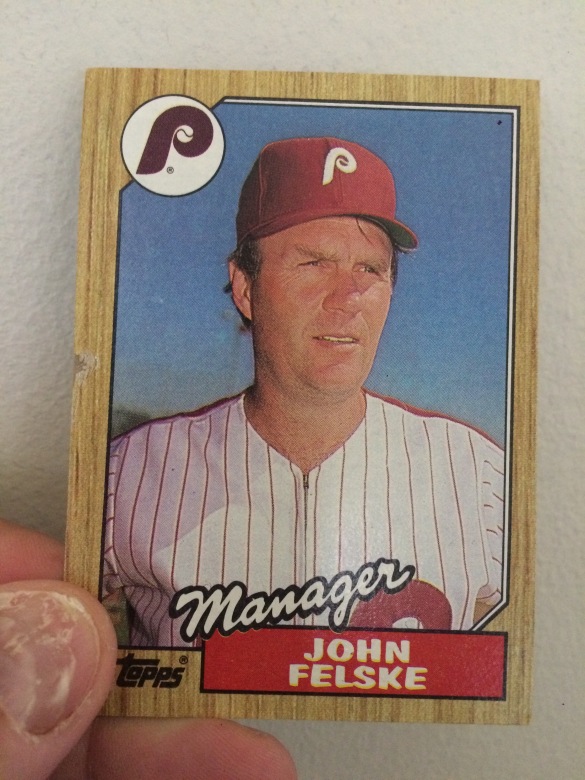 If being the Phillies manager was a game of musical chairs in the late 1970’s through the mid 1980’s, then John Felske was there when the music stopped.

The Phillies, the least successful organization of any pre expansion franchise, had their greatest run between 1976 and 1983. After going from 1903 to 1975 with a grand total of two first place finishes, they went on a tear.

The team won their first ever World Series title in 1980 and won another pennant in 1983 (just the fourth trip to the World Series in team history.) They also won NL East Division Titles in 1976, 1977 and 1978 and played in the 1981 NL East Division Series. After going literally decades between pennants (1915 and 1950 were the only previous ones) the Phillies suddenly became October regulars.

After Green left for the Cubs, Pat Corrales took over but when they failed to win the Division in 1982 and got off to a sluggish start in 1983, General Manager Paul Owens took over as manager and they won the pennant.

Owens stepped down as manager after 1984. The reins were handed over to John Felske, a career minor league player with  few cameos in the majors.

The Chicago native was never much of a hitter, even in the minors. But he played for 11 seasons in both the Cubs and Brewers organizations, bouncing between Double A and Triple A. He played 4 games with the 1968 Cubs, 37 games with the 1972 Brewers and 13 with the 1973 Brewers. After that season, the 32 year old Felske became a manager in the Milwaukee system.

He managed in Newark, Thetford Mines, Berkshire, Spokane and Vancouver in the Milwaukee farm before joining the Toronto Blue Jays coaching staff in 1980.

In 1982, he found himself managing the Reading Phillies and in 1983 piloted the Portland Beavers, the Phillies top farm club. That earned him a promotion to the majors to coach for Paul Owens’ 1984 squad. When Owens left, the managing job was his.

The 1985 Phillies was an ill fitting group of veterans reminding fans of the glory years and young players who weren’t quite clicking. Sure Mike Schmidt was still good for 33 homers and Von Hayes was still a solid hitter and a holdover from 1983.

But veteran Garry Maddox was fading, young infielders Steve Jeltz and Rick Schu were not contributing and former Cy Young winner John Denny took a step backwards. Plus Steve Carlton was no longer the ace he once was.

Things improved in 1986, however. The team had a winning record, 86-75. Mike Schmidt was the MVP of the National League. The team had power and speed, getting both from Von Hayes and Juan Samuel. Milt Thompson, Gary Redus and Glenn Wilson formed a productive outfield.

Steve Carlton played his final games with the Phillies that year as he was released and signed with the Giants. Young Bruce Ruffin took his place and showed some promise.

Steve Bedrosian emerged as the bullpen closer and along side a bunch of veterans, Kent Tekulve, Tom Hume and Dan Schatzeder, the relievers became a strength of the team.

Not a lot of people noticed the solid season in Philadelphia because the Mets ran away with the Division. Most of the winning came after a sluggish start. They were 14-22 on May 22, 11 1/2 games in back of the Mets. They went 72-53 the rest of the way.

They would finish in second place, 21 1/2 games behind the Mets. If there was a wild card in 1986, they would have finished tied with the Reds in that category. There was no wild card then, so the 1986 Phillies went largely forgotten.

Any hope for the Phillies to build upon the positive steps taken in 1986 were quickly dashed in 1987. Felske and company got off to a 29-32 start. The mighty Mets were barely over .500 but the Phillies could not take advantage of them. They were in 5th place seeing the Cardinals take the lead.

Felske had his chance and the Phillies replaced him with Lee Elia. The glory days in Philadelphia were officially over. The team did not contend again for years. Between the 1983 pennant and the 2007 Division Title, the Phillies saw one October, the one and done 1993 pennant.

Lots of great things happened for the Phillies between 1976 and 1983. But the players got old, the next generation did not take over and poor John Felske was there when the music stopped.

We all saw that video of Randy Johnson exploding the bird.

Is it strange, unforgettable and darkly funny?

It may also hold the key to explaining the universe.