On May 30, 2014, I talked about college baseball, the Marlins and a strange save from Joe Nathan.

My dream scenario for Kansas State fans to be able to rub it into Kansas fans’ collective faces fell just short of the Final Four.

I now have to figure out which Final Four team I can find a totally petty reason to root for.

Monday. I’ll figure that out on Monday. 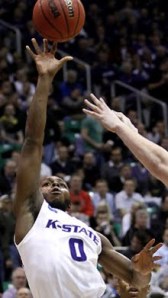 I still can’t name a single player on the Kansas State Wildcats basketball team… yet I am still rooting for them.

And after their double overtime win against Xavier last night a wonderful thing happened for K-State fans:

They are now favorites to go to the Final Four.

With Butler’s win over top ranked Syracuse (two other teams that I don’t know the starting 5 for), Kansas State is now the top ranked school in the West Region.

Now I am sure Syracuse thought they were going to beat Butler, so K-State can’t take them lightly… but if a #2 seed can beat a #5 seed then my Schadenfreude fueled scenario would come true.

Kansas State would be a Final Four Team while Kansas, the #1 team in the country, couldn’t even make the Sweet Sixteen.

And if they make the Final Four, they wouldn’t have to face a #1 seed from the Midwest as Kansas has been knocked off… so it isn’t outlandish to see Kansas State in the Championship game…

And if they can beat Kentucky or Duke…

OK, I am getting ahead of myself. BUT for all of you Kansas State fans out there, savor this. This could be YOUR 2004… that year where your team was better than the big bad “always better than you and you are sick of hearing of it” powerhouse.

Unleash the prick within!