Chances are when you think of the 1988 World Series, the image of Kirk Gibson limping around the bases triumphantly after homering off of Dennis Eckersley comes to mind. That was Game 1. Or maybe you remember the dominance of Orel Hershiser, who threw a complete game victory in Game 2 and in the clinching Game 5.

But the Dodgers won a pivotal Game 4 that neither Gibson nor Hershiser participated in and had they lost, the Series may have gone Oakland’s way.

Sometimes a player can redeem a forgettable post season in one game and go from goat to hero. In the case of Jay Howell, he went from being the face of failure and dishonesty to one of the reasons the Dodgers won the 1988 World Series.

The Dodgers and A’s were linked before the 1988 season began as they were involved in a blockbuster trade that also involved the Mets. Dodgers mainstay Bob Welch was sent packing to Oakland along with reliever Matt Young. The Mets sent closer Jesse Orosco to Los Angeles for a package of minor leaguers and the Dodgers acquired shortstop Alfredo Griffin and reliever Jay Howell. The Dodgers also signed A’s outfielder Mike Davis, who would later figure prominently in the World Series.

Howell was a two time All Star closer for Oakland who they had swiped from the Yankees in the first Rickey Henderson deal. But after an injury in 1987, A’s manager Tony LaRussa had decided to convert fading starter Dennis Eckersley into a reliever. Needless to say that experiment worked and Howell became expendable.

As Eckersley was redefining the role of closer in the East Bay, Howell did a serviceable if unspectacular job for LA who, behind Hershiser and Gibson, won the NL West.

In the NLCS against the heavily favored Mets, Howell blew a Hershiser lead and lost Game 1. After a rain out, Howell again was a bullpen goat for a Hershiser game after he was caught with pinetar in his glove in Game 3. The Dodgers only chance of beating the mighty Mets was to win all of Hershiser’s games. Now thanks to Howell, they have lost 2 of those starts and no longer had a bullpen closer after he was suspended for the rest of the series.

Manager Tommy Lasorda improvised and used Alejandro Pena, Brian Holton and even Hershiser himself to close out games and somehow the Dodgers managed to win the pennant.

In the World Series, now without Gibson except for the one pinch hitting appearance, they looked overwhelmed against Oakland. But a Gibson homer and a Hershiser Game 2 shutout suddenly gave the Dodgers a 2-0 edge.

In Game 3, the Dodgers were trying to take a 3-0 lead  and managed to get the game to the 9th tied 1-1. Howell made his first appearance since his suspension and gave up a walk off homer to Mark McGwire, getting the A’s back into the series. With their ace Dave Stewart going in Game 4 against Tim Belcher, Oakland was all but assured to tie the series at 2. That would mean the Dodgers would have to win at least one non Hershiser start to win the series.

Howell was not only the pine tar cheater, but he may have let Oakland take control. The press wondered if Lasorda should turn to Pena or Orosco as the closer and sit Howell.

In Game 4, the limping Dodger line up took advantage of sloppy Oakland defense and scored 2 runs in the first. The A’s answered with a run of their own in the bottom of the first. In the third, Mike Davis reached base for the second time on an error, this one on Walt Weiss, that scored another unearned Dodger run. LA was not defeating Dave Stewart. The Oakland defense was.

In the bottom of the 7th, the Dodgers were up 4-2 but Oakland was rallying. Dave Henderson doubled to make it a one run game. Lasorda wasted no time to give Howell a chance to redeem himself. He brought his embattled closer into the 7th of a one run game.

The next batters he would have to face: Jose Canseco, Dave Parker and his nemesis from the night before, Mark McGwire.

At first the decision looked like it was going to be a disaster and Howell would have more on his resume of 1988 failures. He walked Canseco and Parker reached on an error that would have ended the inning. Now McGwire faced his former teammate with 2 outs, the bases loaded and LA up by one.

This time Howell won the face off, getting him to pop up to first baseman Tracy Woodson. But the game was not over.

In the 8th, Lasorda stuck with Howell. He got the first two batters out before Ron Hassey singled. But a strike out of Walt Weiss put the Dodgers 3 outs from stealing Game 4.

Orosco and Pena warmed up in the 9th, but once again Lasorda sent out Howell to close the game. With one out, Dave Henderson singled. Jose Canseco came up as the winning run and he was more than capable of joining his Bash Brother McGwire in launching a walk off shot.

With the count full, Howell struck out Canseco swinging. Two outs. With the lefty slugger Dave Parker coming up, bringing in Orosoco seemed like the correct move. Lasorda would have nothing of it. Howell was going to finish the game, even if one swing of Parker’s bat could still end it for the A’s.

On the first pitch, Parker popped it foul to third baseman Jeff Hamilton. Howell had not only saved the game, he had gone 2 1/3 innings to do it, facing at least the tying run with every pitch. He closed it out under the highest pressure situation and did so like a champion.

In the post game press conference, Tommy Lasorda crowed to the reporters who all trashed Howell in their columns, saying he can’t wait to see what they write about him now. He seemed to be on a mission to save Howell’s reputation.

The stunned A’s had now lost both games where Stewart faced off against Belcher and now faced Hershiser in an elimination game. The Dodgers would win it and mob “Bulldog” on the mound for the title (the only franchise to win multiple World Series in the 1980’s.)

Yes it was Gibson’s homer that was the highlight. Yes it was Hershiser who was the MVP. But if Howell did not redeem himself in Game 4, the 1988 World Series might have been that memorable 7 game Oakland victory.

Of the many former A’s players who came back to haunt their team, nobody came up bigger than Jay Howell in Game 4. That makes him the unsung post season hero for October 19. 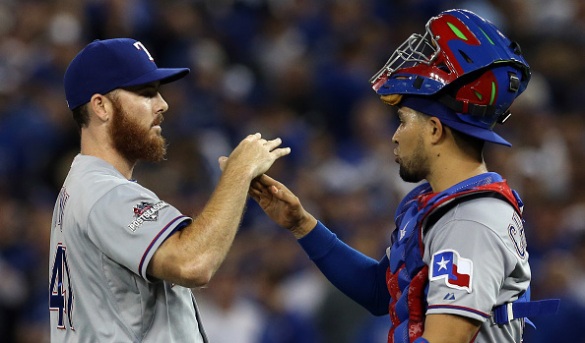 The Rangers have played two game in the post season and have two saves from two different pitchers. And neither of those pitchers are named Shawn Tolleson who led the team with 35 saves.

It is refreshing when managers make decisions based on the situation rather than just drag the closer out in the 9th as a default. (Sam Dyson pitched the 9th in Game 1 instead of Tolleson. Manager Jeff Banister used Tolleson in Game 2 when it was NOT a save situation.)

The save became an official stat in 1969. Teams in the post season initially played to the situation instead of using the closer in all close 9th innings. But as saves began to pile up (especially after Tony LaRussa began using Dennis Eckersley one inning at time) and the prices of an innings closers sky rocketed, managers seemed to manage by the book and stick the closer in no matter what.

Every once in a while, a team will have multiple pitchers record a save in a post season. It does not happen often, but they pop up. Just last year, the Giants had 3 different pitchers credited with a save. If Tolleson saves a game, then the Rangers will match that total.

So here are all the teams to use more than one pitcher to save a game since 1969.

@sullybaseball should he get some hall of fame consideration? http://t.co/movvhnsd4f

This is a tougher question than I anticipated. Tim Hudson probably belongs in that wonderful subgroup of pitchers who had terrific peaks, were World Series Champions but fell short of the Hall of Fame. Perhaps a new museum needs to be made for them.

It is an all inclusive episode of The Sully Baseball Daily Podcast.