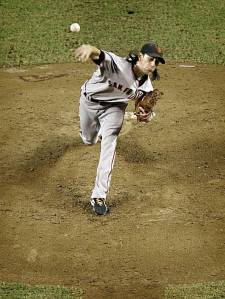 It was only a few weeks ago that I was lamenting the Bengie Molina trade and wondering if Tim Lincecum was ever going to pitch like an ace again.

The Giants needed him to come up big as an ace and all throughout his gruesome August, he came up small.
But his last game was solid… and tonight he was terrific.
Oh he’s had better games over all, but he started perfectly, pitched into the 7th, struck out 11 and gave the Giants the chance to keep the pressure on the Padres, Phillies and now the Braves (who are the leader of the Wild Card since Philadelphia leap frogged them into the Division Lead tonight.
There was a bigger significance to this game.
The Giants are pitching again. And they are starting to hit. Things are clicking and if Sanchez and Cain and Bumgarner pitch well and Wilson keeps saving games, the Giants will probably be playing in October.
But as for the ace… I think Paul Newman said it best in The Color of Money.
“Hey… I’m Back!”