Often I wonder about people who do not get a shot or are constantly passed over for those with more experience.

The best answer is “survive.” Pete Mackanin is a survivor who recently got his big break.

The Chicago native was drafted by the Senators in 1969 as an infielder. He bounced around Single A ball for the next few years, not exactly lighting the world on fire with his bat. A promotion to Double A and a cameo in Triple A in 1972 showed no evidence that a trip to the majors was on the horizon. But after finding his stroke with Triple A Spokane, he earned his first promotion to the parent team, now the Texas Rangers.

After two brief big league stints, he got his chance to start with the 1975 Montreal Expos after being a toss in for the Don Stanhouse for Willie Davis deal. He posted career highs in homers (12) and stolen bases) while accumulating 495 plate appearances. He tripled home 3 runs in a September 23 win over the Cardinals and played solid defense.

But as the Expos were forming an impressive team with the likes of Gary Carter, Steve Rogers, Andre Dawson and Ellis Valentine on the roster, Mackanin was not part of the long term plan.

He battled injuries and minor league demotions in 1978 and 1979 in the Phillies organization before, as this card illustrates, got a new chance with Minnesota.

Mackanin started both of those seasons, but seemed more like a place holder. By 1982, he was a 30 year old in Triple A. He did not get the call back to the majors in 1982 nor 1983 with the Rangers. In 1984, he was in Triple A for the Cubs. As the parent team went to the post season, Mackanin was playing his final games.

When his playing days ended, Mackanin’s survival days began. He became a minor league coach and manager. The Hickory Crawdad and Lynchburg Hillcats called him “skip.”

He coached on the big league level with several organizations, constantly finding himself on staffs but not on the shortlist to manage a team.

While on the Pirates coaching staff, he stepped in to replace manager Lloyd McClendon after he was fired towards the end of the 2005 season. But when a permanent manager was picked, the Pirates went with experience and brought in Jim Tracy.

Mackanin survived, managing in the Florida State League in 2006, awaiting his next big break.

In 2007, he moved to the Reds organization and again took over a big league team as manager when Jerry Narron was fired. Once again, a man with decades of coaching and managerial experience was passed over when the season ended as the Reds opted to hire the experienced Dusty Baker.

He survived, finding himself with the Phillies on their coaching staff when they went to the 2009 World Series. When Charlie Manuel was let go, Hall of Famer Ryne Sandberg took over the managerial reins. But Sandberg resigned suddenly in 2015 and Mackanin once again became the seat filler.

This time, however, the Phillies did not seek a more experienced name. They removed the “interim” label from Mackanin’s title and he has been the Phillies manager ever since. With the team rebuilding and slowly putting together a new product, it remains to see if Mackanin will remain manager when Philadelphia is a contender again.

But at least a true baseball lifer was able to survive long enough to manage at the highest level and stay there for more than a few months.

Now he has experience. 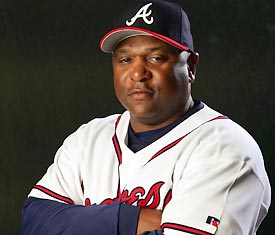 Were there ever two players that had worse luck for winning a World Series ring than Don Mattingly and Terry Pendleton?
I wrote last year how Mattingly’s career was perfectly wedged between two great Yankee eras.
Terry Pendleton’s career was no less agonizing in terms of getting a ring. He was part of two Cardinals teams that lost game 7 of the World Series, including the Don Denkinger game of 1985.
And as a member of the Braves he was the MVP of their miraculous 1991 pennant run. But they lost THAT series in 7 games… and lost the World Series in 1992 and the NLCS in 1993. Pendleton went to the Marlins in 1995 as the Braves won the World Series. He returned to Atlanta the next year, only to see the Yankees pull off one of the great upsets in World Series history… the year after Mattingly retired.
Well guess what?
Both of them are coaches on teams that might very well be playing deep into October.
They can get their belated World Series rings THIS year!
If the Dodgers win it all, Mattingly would finally have a ring.
If the Braves win it all, Pendleton would get his at long last.
And there are other ringless veterans on almost every coaching staff that has either clinched or is in contention.
Glenn Hubbard was played 12 seasons but was cut from the 1989 World Champion A’s team in midseason.
Tony Pena would have been the 1987 World Series MVP if the Cardinals could have held onto their game 7 lead.
Andy Van Slyke not only was on that same 1985 Cardinals team with Pendleton but also played for the Pirates team who had their World Series dreams dashed by Francisco Cabrera.
Interestingly, each member of the official Cardinals coaching staff have already won a World Series ring as a player or as a coach (or in the case of Hal McRae, both.)
Coaches don’t get the attention that the players nor manager get… but for sentimental reasons let’s take a look at which former Major Leaguers currently on coaching staffs might finally earn that World Series ring at long last.
ATLANTA BRAVES