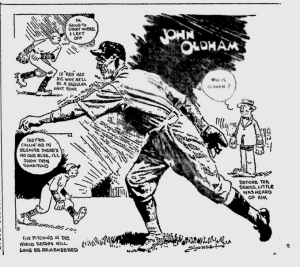 I will confess this entry of “Sully Baseball Unsung Post Season Heroes” is the inspiration for the entire series. I have a fascination with Pirates pitcher Red Oldham and wanted to celebrate his unlikely and mostly forgotten World Series heroism.

I have written a few blog posts about him and wanted to write this series to give recognition to Red and the other players whose fame has dimmed over the years. Arguably the most obscure person to ever clinch Game 7 of a World Series, John “Red” Oldham began the 1925 season in the minors and would end the 1926 season in the minors, never to reach the majors again. But in between he would experience World Series glory.

The Pirates won the 1925 pennant and faced the defending World Champion Washington Senators and their superstar pitcher, Walter Johnson, in the World Series.

Initially it looked like no contest. The Senators ran up a 3-1 lead in the series, thanks to a pair of complete game victories by Johnson. The Pirates took a back and forth Game 5 and over came a 2-0 deficit to win Game 6 and force a winner take all Game 7 with Walter Johnson on the mound.

Heavy rains delayed Game 7. With the infield soaked, the Pirates grounds crew decided to dump barrels of gasoline on the dirt and light it on fire to dry it out. There were different environmental rules back then.

Meanwhile, Pittsburgh manager Bill McKechnie tried to figure out how to juggle his pitching staff in the finale against the Big Train. At one point he considered using Red Oldham to start, even though he had not used the 31 year old lefty for the entire World Series.

Oldham had played for the Tigers in the 1910’s and early 1920’s and did not exactly set the American League ablaze like the infield at Forbes Field. The most famous incident in his career was having Ty Cobb dress him down and basically tackle him during a game in Detroit.

After bouncing around the minors and getting in trouble with the commissioner for playing in outlaw leagues, Oldham somehow found himself on the Pirates midway through the 1925 season. Injuries forced the team to find some left handed depth in their staff. Oldham appeared in 11 games, 4 of them starts. He threw three complete games and recorded a save.

McKechnie decided against starting Oldham and turned to Game 5 winner Vic Aldridge. Oldham would sit in the bullpen and witness one of the strangest Game 7’s in baseball history.

Aldridge did not make it out of the first inning as the Senators gave Johnson a 4 run lead before he even took the mound. Johnson kept the lead in a steady rain and mist but he was by no means dominant.

In the 7th inning, future Hall of Famer Pie Traynor tripled home the tying runs but was thrown out trying to make it an inside the park homer.

In the 8th, the Senators took the lead on a Roger Peckinpaugh homer and Washington player/manager Bucky Harris let Walter Johnson bat. Despite his struggles, Johnson was going to complete the game.

With the rain picking up, Commissioner Kenesaw Mountain Landis nearly called the game and declared the Senators World Champs, but decided to let the game play in the downpour and fog.

Johnson was gassed but had a 7-6 lead with 2 outs and nobody on in the 8th, he was 4 outs from a World Series repeat. But Earl Smith doubled and Carson Bigbee smacked a game tying RBI double. Then a walk and an error loaded the bases. Still no relief for Johnson who faced future Hall of Famer Kiki Cuyler. He hit a drive to right field into the fog. It was declared a ground rule double. Washington right fielder Joe Harris said it was foul by 10 feet. There was no replay then. The Pirates took the lead and were three outs from winning the World Series.

McKechnie had already used Aldridge, Johnny Morrison and Ray Kremer as pitchers. Another one of his pitchers, Emil Yde was used as a pinch runner. With his options running out, he turned to Oldham.

Given a two run lead, Oldham had a little wiggle room. But Washington lineup offered little comfort. He would face Sam Rice, Bucky Harris and Goose Goslin. While you may not know those names well, go to Cooperstown. All three are enshrined there. An unknown who began the season in the minors had to face three future Hall of Famers with the World Series on the line.

On a 2-2 count, Oldham got Rice looking. One away. With no balls and 2 strikes on Bucky Harris, he recorded an out with a line drive caught by second baseman Eddie Moore. Now only Goslin remained.

With the count 1 ball and 2 strikes, Goslin was called out looking. Oldham had done it. He got the save and the Pirates, in the pouring rain and mist, became the first team to erase a 3-1 hole and win the World Series.

American League president Ban Johnson admonished Senators manager Bucky Harris for leaving Walter Johnson in for too long. And the Senators were one commissioner’s decision from repeating in the 8th.

But it was the Bucs title and the most obscure Pirate had closed it out. By the next June, Oldham was let go by the team he pitched to the title and was not with the club when they won the 1927 pennant. After a few years toiling in the minors, Oldham retired and eventually died in California.

His deeds have faded with time and his one moment of glory took place appropriately during a misty day that was hard to see, much like his foggy legacy.

But his clutch performance, retiring three future Hall of Famers to clinch Game 7 of the 1925 World Series should be recognized somewhere. That makes him the Unsung Postseason Hero of October 15.

It is Sunday and time for The Sunday Request on The Sully Baseball Daily Podcast.

@sullybaseball if you were tapped to produce a “true story” baseball movie, what story would you like to see told?

What movie would I want to see?

Maybe a colorful and complicated brawling manager… or a woman who ran a powerful Negro League team… or a pitcher who could have been brilliant and insane… or the least likely World Series clincher of all time.

I put on my movie producer hat on The Sully Baseball Daily Podcast.

END_OF_DOCUMENT_TOKEN_TO_BE_REPLACED 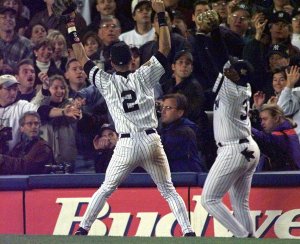 Today on The Sully Baseball Daily Podcast, I talk about the greatest moment of every baseball year: The moment a team wins it all and stands alone as the kings of baseball.

My fascination with the ending of the baseball year and how it is celebrated is something I can discuss for hours. Today I do so for a little more than 20 minutes.

And yes, I talk about that picture above of Charlie Hayes and Derek Jeter making the final out of the 1996 World Series.