My first contribution to Bleacher Report is a compilation of the best moments in World Series history by the losing team.

Cookie Lavagetto breaking up a no hitter… Bob Gibson’s domination of the Tigers… Fisk’s homer… the post 9/11 World Series and the heroic Yankees… All amazing moments. And NONE were World Champs that year.

It’s time to continue the Why Each Team’s Potential World Championship Would Be Good For The Game series. The next entry? The Milwaukee Brewers.

On July 26th, the Brewers were in second place behind the Cardinals and just 1/2 a game ahead of the Pirates. 1 game separated 3 teams. And the Defending Division Champion Reds were a mere 5 games back.

The NL Central promised to be a dog fight to the end… that is until the Brewers starting winning.

Since that day, the Brew Crew is 27-8. No team in baseball has played better than Milwaukee since July 26th and their magic number is 16.

Playoff baseball is returning to Wisconsin. But why would an average baseball fan want to see the Brewers win?

would be good for baseball

There’s no doubt who the biggest team in Wisconsin is. The Defending Super Bowl champion Green Bay Packers reign supreme. But it would be great for their fans to experience an embarrassment of riches. Places like New York, Boston, Detroit, Miami and Tampa Bay have experienced multiple titles in different sports last decade. Hell even Anaheim had a World Series and Stanley Cup champ close to each other. Why not in Wisconsin? You know it will be a great party.

2. Prince Fielder’s defection would not be as harsh if he delivered a title to Milwaukee.

Prince Fielder is as good as gone. It wouldn’t make sense for the Brewers to devote such a gigantic chunk of their payroll to a first baseman. And no doubt a team in need of a PR boost this off season will overpay for Mr. Fielder. But stars who depart without a ring leave their old city with unfinished business. Fielder can erase all that in October (and match his father with rings, making the most public Father and Son rivalry even more intriguing. 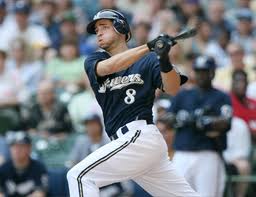 Ryan Braun could very well win the NL MVP this year. And I have a feeling that if you said his name to most sports fans, they would say “Who?”

The former NL Rookie of the Year has put up 5 years of wonderful numbers and not a lot of fame to go along with it. Maybe shining on the national stage would change that.

How could America NOT embrace a power hitter named Braun?

4. It would simplify the question “How long have Brewers fans waited for a World Champion”.

How long have Brewers fans waited for a World Champion? Well the Brewers have NEVER won a World Series… but the Braves have. Not the Atlanta Braves, even though THEY did as well. The Milwaukee Braves won in 1957. But have Brewers fans been waiting 54 years? What about the few years there was no team in Milwaukee? Do those count? It is very complicated. But if the Brewers win, it is cut and dry. 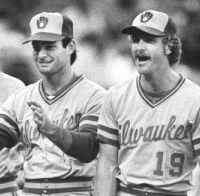 5. A Brewers title would mean a lot of Hall of Famers would be celebrated

For a team that has exactly one pennant to its credit, there would be no shortage of Cooperstown enshrined heroes to throw out the first pitch.

And some fellow named Hank Aaron finished his career as a Brewer and supposedly had some decent years in Milwaukee as a Brave. I’ll have to look him up.

6. A Ron Roenicke led title could be traced back to Walter Alston

Walter Alston, whose big league playing career consisted of one strikeout, worked his way up to the bigs as a manager. He became a World Champion and a Hall of Famer.

One of Alston’s coaches was Tom Lasorda, who became a World Champion manager and a Hall of Famer.

One of Lasorda’s players and coaches was Mike Scioscia. He became a World Championship manager and I believe is putting together a Hall of Fame caliber career.

One of Scioscia’s coaches was Ron Roenicke. If he wins a World Series title, it bodes very well for for one of the coaches on his staff to pass on the Alston wisdom.

7. A THIRD unlikely championship for Craig Counsell would be amazing.

Counsell has bounced around between the Rockies, Marlins, Diamondbacks and Brewers. Hardly marquee big budgeted franchises. (He played 1/2 an unmemorable season with the Dodgers as well.) Yet he was a World Champion in 1997 with the Marlins and 2001 with the Diamondbacks (winning NLCS MVP honors.) 3 rings in three decades without being a Yankee or a Red Sox would be impressive.

If the Brewers are trailing in Game 7 of the World Series, look out for Counsell. Incredibly, he was a part of two Game 7 comebacks.

He hit the game tying sacrifice fly in the 9th inning of Game 7 of the 1997 World Series. In the 11th he would score the World Series winning run.

In Game 7 of the 2001 World Series, he was hit by a Mariano Rivera pitch in the 9th inning and was on base when Luis Gonzalez blooped his World Series winning single. If the Brewers are trailing in the 9th, they might send Counsell up just to see what happens.

8. National exposure to Miller Park rituals would be wonderful for the game.

“Wait, they have a race with men dressed as sausages?”

“Explain to me why Bernie the Brewer goes down the slide from his chalet after each homer?”

There’s no logical explanation for these rituals, which makes them being seen on National TV even better. 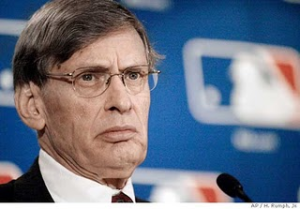 9. A Brewers championship would be a subtle middle finger to Bud Selig

Of course Bud Selig would be thrilled to see the Brewers win and I bet he would gleefully hand the World Series trophy to owner Mark Attanasio. But lest we forget all of those years Selig was owner of the Brewers and never won that trophy himself.

And remember he took part in the cabal that ousted Fay Vincent and put himself, the owner of a team, as “temporary commissioner” in 1992. Here we are 19 years later and he’s still here.

In 1992 the Brewers had a terrific season. Then year in and year out for the rest of the time that the Seligs ran the Brewers, they had a losing season. And all the while, the refrain that came from Selig was that smaller market teams couldn’t compete. Attanasio took over the team and in 2 years they were a .500 team. In 5 years they were a playoff team. Now they are a World Series contender.

Maybe Selig could have done that as owner, if he wasn’t too guilty colluding.

10. How great would a Bob Uecker World Championship call be?

Seriously. Bob Uecker calling the final out of a Brewers title. Have a few beers in him and build up the excitement and I have a feeling it would be the phone ring of everyone in Wisconsin.

And you thought his “Jusssssst a bit outside” call in Major League was memorable. Imagine him happy with the World Series result!

So it looks like post season ball in the Dairy Land is going to happen again. I for one wish they went back to the “ball in glove” hat from the 1970s and 1980s. But guess what? I am thinking that Brewers fans won’t be too picky about what hat their team wins in they win it all.

And that is a distinct possibility.