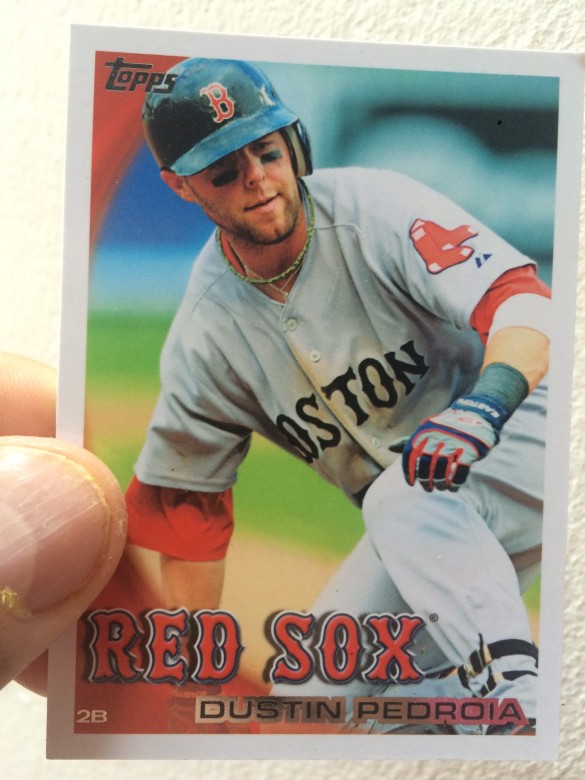 Will Dustin Pedroia be elected to the Hall of Fame? I am not sure.

He is certainly getting the hard parts of the Hall of Fame resume checked off. Rookie of the Year, MVP, post season glory, a pair of World Series rings, being part of two different eras of Red Sox Octobers.

If you are reading a blog like this, especially on a Sunday, then chances are you don’t need for me to deep dive into his biography the way I do normally. You know who Dustin Pedroia is.

And you know that in terms of October glory in Boston, he is the connecting tissue between the Manny Ramirez, Curt Schilling and Jason Varitek Red Sox and the Andrew Benetendi, Mookie Betts, Xander Bogaerts Red Sox.

Yes, I know David Ortiz was as well, but unless he returns, Big Papi is no longer on the squad. The veteran leader on this team is now Pedroia. And what a leader he is.

I remember the short firey second baseman was put into the cleanup spot between Ortiz and Ramirez and nobody blinked. He will club double digit homers and still get his 200 hits and keep his strikeout total low.

He had had some terrific post season moments, twice homering in a Game 7 of the ALCS. He also has had some bad post seasons but even then, has his highlights. Lost in the Middlebrooks obstruction call ending Game 3 of the 2013 World Series was an amazing almost game saving play by Pedroia to cut off the winning run at home.

A curseless title would be led by Pedroia.

One thing that frustrates me is that Pedroia could have been part of another new element of uncharted territory: A connection with the Yankees in a post 2004 world.

As Robinson Cano is putting up terrific numbers in Seattle after taking the 10 year deal to leave the Bronx, a “What If” is emerging in the Red Sox Yankees rivalry.

In other words, they have turned the page since the rivalry and the curse hit the climax and essentially the end of the narrative. There is no longer a 19-18 chant. But the likes of A-Rod, Cano and other newer Yankees have their rings as well.

The Red Sox made the post season again in 2016 with a new young cast. Meanwhile Judge, Sanchez et al are creating a new core of Yankees. There could be home grown Red Sox and home grown Yankees building a new rivalry, but one without the specter of the Yankees haunting the Red Sox.

If Cano had re-signed with the Yankees, there would have been a perfect symmetry. Both the Red Sox and Yankees would have a veteran second baseman who played with the core of 2004 and won a World Series since then. (I can’t resist pointing out Pedroia has 2.)

Both remain All Stars and both would have the “been there, done that, let’s do it again” aura to them.

Alas, it is not to be and frankly I feel odd that Jacoby Ellsbury is one of the main veterans on this rebuilding Yankee team. Actually Brett Gardner seems to be taking that mantle, but it doesn’t feel the same. He wasn’t a starter in 2009 and he isn’t the same position.

Ah well, maybe baseball isn’t supposed to have perfect symmetry. Maybe I will have to take comfort that Pedroia has a chance to lead the Red Sox to another title and if he does so in 2020 or 2021, then he would have done so in 3 different decades.

On December 5, 2013, I connected the death of Nelson Mandela to his love of sports. Then I criticized Seattle’s desperation.

On November 24, 2015, I made the easiest prediction of all time: Robinson Cano will eventually return to the Yankees.