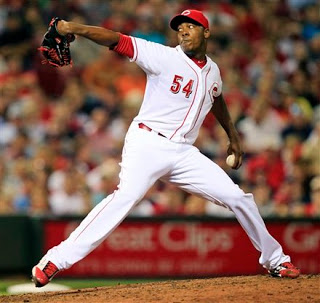 This has been a strange week for Aroldis Chapman.
He was arrested for speeding with a suspended license. Now I have never had a suspended license, but if I ever did, TRUST ME the fastest I would ever drive is 54 MPH. It’s a good rule to keep.

“I shouldn’t be driving. What’s the one thing I can do to avoid a policeman from finding out that I am on the road illegally? Oh yeah. Speeding!”

Then he is involved in some lawsuit regarding human trafficking, ratting out someone who was smuggling people, being a stooge for the government and escaping the country. It is so bizarre and convoluted that the man suing him is either 100% correct or 100% out of his mind.

Once again, it is a situation I have no frame of reference to understanding.
I’ve never been involved in a situation where my friends are trafficking people.

And if any of you, my dear readers, are doing anything like that, don’t share it with me. Let’s just talk baseball.

So that’s a pretty messed up week. Kind of puts my day to day issues in perspective.

That being said, it looks like the Reds finally came to their senses of what to do with him before he gets into more legal trouble. HE’S CLOSING!

As I’ve been screaming for them to do, they have a remarkable weapon who can shut down the other team in the 9th  in a way that doesn’t seem fair.

His ERA is still 0.00.
Sean Marshall’s is 4.80.
Chapman has let up 7 hits all year.
I think I saw Marshall let up 7 hits in his last outing against the Yankees.
Chapman has 41 strikeouts in 23 1/3 innings and strikes out nearly 6 batters for every walk.

In his first 2 games as the Reds closer, he has 2 innings pitched, 3 strike outs, no walks, no hits, no nothing. (Both games had a runner reach on an error.)

Of course they didn’t use him as a closer on Monday and the Reds had a nail biting 9th with Arredondo and Marshall.

Is Dusty Baker being overly cautious based on his experience with the Cubs? Did Kerry Wood’s retirement remind him of an arm he wore down to the ground?

I’m not saying that Chapman is making the best decisions in the world. But maybe a slightly reckless person chucking the ball in triple digits is just what the Reds need.

I just watched the Reds beat the Yankees. It was a nailbiter, right down to the last pitch.

Closer Sean Marshall was shaky and the Yankees finally started getting some hits with runners in scoring position.

Reliever Jose Arredondo had to come out and relieved Marshall. He got the final two outs and earned his first career save.

There was no reason for it to get to that point.
In the 8th inning, Dusty Baker brought in Aroldis Chapman out of the pen.

He has a decent ERA.

But not only that, but when Chapman was on the mound against Granderson, Cano and A-Rod, it didn’t seem fair. Chapman was so dominating that any hit would have looked miraculous.

It is so obvious that he has big league hitters number.
Nobody has scored a run off of him and he has 38 strikeouts in 21 1/3 innings against only 7 walks.

Why trust the 9th inning to someone else? Today he looked like he could have gone another inning. At least give him the chance to face Ibanez, Swisher and Martin?

There was no doubt a sigh of relief in the Yankee dugout when Chapman was taken out.

And if Chapman is going to be a reliever anyway, why not use him in the way that best helps the team out. Not all innings are created equal.

And players at the bat can press knowing that these are their last licks. And to do it against Chapman would essentially make the game 8 innings long.

I’ve been screaming this since September of 2010.

Why doesn’t anyone listen to me?