Paul Goldschmidt homered 3 times, added a single and walk, driving in 5, leading the Cardinals to a 9-5 victory in Milwaukee.

German Márquez struck out 7 Marlins in 6 innings, holding them to 2 hits, 3 walks and 1 run as the Rockies took the 6-1 final.

Matt Shoemaker shutout Toronto over his 7 innings, allowing 2 hits and striking out 7 to earn the 6-0 decision for Detroit.

Mike Trout reached base 3 times, including a key 2 run double, as the Angels rallied late to win 6-2 over the A’s.

Marco Estrada blanked the Angels over 6 innings, scattering 2 hits and 2 walks. The A’s bullpen would blow their lead and lose the 6-2 game.

A. J. Pollock got on base 5 times, including a homer, with 3 RBI, but the Dodgers dropped the 5-4 final to Arizona in 13 innings.

Trevor Richards allowed 1 run and 4 hits, striking out 4 Rockies over 6 strong innings. He would not get the decision as the Marlins were beaten, 6-1.

Domingo Santana singled, homered and walked twice. However his Mariners suffered their first loss of the year as the Red Sox rallied in the 9th, 7-6.

END_OF_DOCUMENT_TOKEN_TO_BE_REPLACED

Comedian and friend of Sully Baseball, Poppi Kramer, joins the podcast to continue her conversation about her love for the Mets.

She likes to think of herself as an Esoteric Lunatic. I can’t argue with her.

It is an F— bomb filled episode of The Sully Baseball Daily Podcast.

END_OF_DOCUMENT_TOKEN_TO_BE_REPLACED 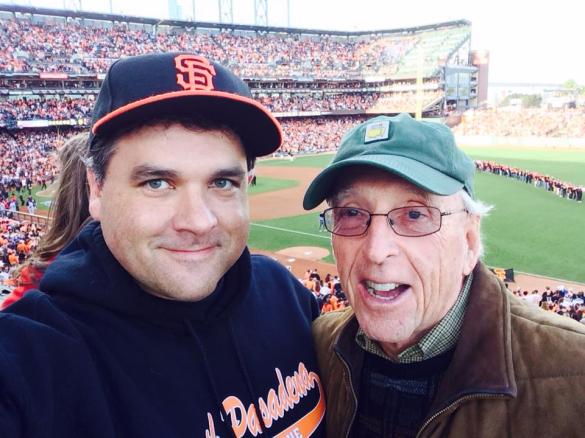 I had never been to a World Series game in my life.

Neither had my dad, a lifelong Giants fan.

We went to Game 3 of the World Series together. I tried my best to share the experience of being at the game last night

It is fathers and son episode of The Sully Baseball Daily Podcast.