Justin Morneau is complaining about the dimensions of Target Field and he wants them changed?

If I were you, I wouldn’t want a DAMN THING changed about Target Field. So a few homers turn into doubles… keep winning there and it will salve all wounds. 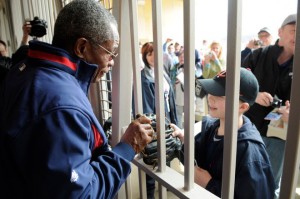 He’s a Hall of Famer!
He doesn’t belong behind bars!

About a week ago, the Twins did what many people thought would have been impossible:

They found a way to keep hometown hero Joe Mauer from leaving via free agency and going into a bidding war between both New York teams, the Red Sox, Cubs, Angels and any other big rollers!

Now it’s not like he is going to go broke as his deal averages $23 million a year, but the Twins have come a long way from being a team that players automatically leave.

But how was this monumental event in the franchise’s history become public?

Through a release and a press conference in Florida.

I’m sorry but the Twins dropped the ball to have a tremendous theatrical event with this contract.

Nick Blackburn signing for 4 years? Sure, send out a press release and have a meeting in Florida.

But Joe Mauer staying with the Twins? That is a gigantic middle finger to everyone who said the Twins couldn’t compete and should be contracted?

The Twins needed to announce this with a little bit of flair.

You may not have liked how Roger Clemens appeared in the Steinbrenner box in 2007 to announce he was coming back to the Yankees.

But it was memorable.

It was a secret and it was announced not via a press release but in front of a huge crowd who went berzerk.

The Twins might not be the Yankees… I know Minnesotans are more low key people than New Yorkers.

But this needed a little bit of Broadway showmanship.

The Pohlads and GM Bill Smith strike a deal with Joe Mauer during spring training… but they keep it under the TC on their hats. Reporters continue to hound everyone about the extension, but they stay mum. 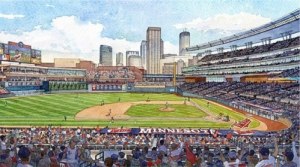 Then it is opening day at the new Target Field.

The place is packed and Twin fans are going nuts for their new home… but there is still the apprehension in the air about their hometown hero staying long term.

Flags of past titles are raised by Twins heroes of the past. Play by play announcer Dick Bremer introduces each of the legens.

The players are introduced… and no doubt Mauer will get the biggest applause. (And also there will be certainly people holding up signs saying things like “Don’t Go Joe!”)

Then Joe is called to home plate.

He is handed his AL MVP Trophy by the Pohlad’s and Bill Smith. Mauer holds it up (like Justin Morneau did when he won his a few years ago.)

The crowd goes nuts… but in the back of everyone’s mind they wonder “is this all fleeting.”

So the ceremony wraps up… until Dick Bremer says “Wait, I think we have one more thing to take care of.”

Then Catherine Puckett and Kirby Puckett Jr., the children of Kirby, walk out with a rolled up piece of paper ink well and a quill.

A small table and chair are set up behind home plate.

The Puckett kids hand the piece of paper to GM Bill Smith who reveals that it is an agreement for an 8 year contract extension for Joe Mauer.

“Do you want to sign it Joe?” asks color commentator Bert Blyleven.

Joe takes the microphone. “I don’t know.” Then looking to the crowd. “Do YOU want me to sign it?” 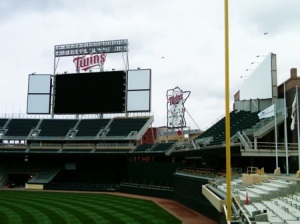 The crowd starts chanting it.

He takes the quill and signs it… right there at home plate where he will call his home for the next 8 years. And when the contract ends, he would have spent 13 1/2 seasons as a Minnesota Twin.

The Twins have a new home and a legit superstar to call their own. A Minnesotan who will STAY in Minnesota!

Mauer takes a Cal Ripken-esque lap around the ballpark, high fiving the fans who will cheer him on at least through 2017!

Then he gives one last wave to the crowd and the Twins play ball.

I didn’t suggest that Prince is lowered onto the pitchers mound or someone busts out a Ouija board to get the financial approval of the ghost of Carl Pohlad.

I didn’t have a Big Paul Bunyon and Babe the Blue Ox wander onto the field.

I had a small table, a chair and a signing of a piece of paper. (Clearly it will be a ceremonial contract. The real one would have been signed in secrecy.)

I feel a moment like this should have been played to the crowd. This is a unique signing and the joy of it should have been a collective outburst shared by tens of thousands of Minnesotans… sitting OUTSIDE together… in early April.

You Christen the new park with a moment Twins fans will remember forever on the very first day.

Provided they aren’t under 9 feet of snow.