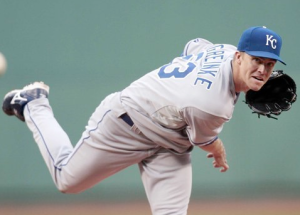 A casual look at Zack Greinke’s stats and you’d think he was having a disastrous follow up to his Cy Young season last year.

He dropped to 1-6 losing again to the Red Sox today.

And another quick look at Tyler Clippard’s stats, you’d think HE was a Cy Young contender! He’s second in the NL with 7 wins against only 3 losses and has a 1.93 ERA.

But Clippard, a reliever for the Nationals, has piled up those wins by blowing leads and being the pitcher of record for Nats comebacks.

And Greinke has pitched really well this year. He’s had 6 games where he has gone 7 innings or more, letting up 2 runs or fewer and lost 3 of those games and got a no decision in the other 3.

Those 6 games are reflected in his win loss total with an 0-3 mark.

And today was one of those 6. He lets up an RBI grounder to Mike Lowell and THAT’S YOUR OFFENSE! Drive home safely.

Don’t get me wrong, as a Sox fan, I love it.
I just can’t help but feel for the guy.

He’s trying to earn a win and Tyler Clippard is picking them off of carcasses!

Back up to +2… and Clay Buchholz is pitching like an All Star.

Lester for the split tomorrow 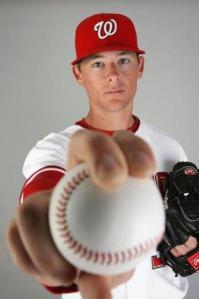 That’s right, he’s got the decision in all 4 games.
If the Nats rallied in the 9th yesterday, he would have won 4 games in 4 days!

Instead he has to settle for a mere 3 wins in 4 days.

Remember how I claimed he was trying to make a run at Jack Chesbro’s unbreakable record of 41 wins in a season? Well it isn’t looking so outrageous now.

Today against the Mets he became the league leader in wins with 7 wins against 1 loss.

Hmm… even at THIS pace he can’t catch Chesbro. Man, that was quite a season Jack Chesbro had in 1904. 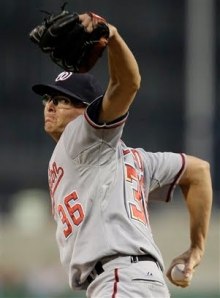 He almost did it again.

Tyler Clippard came into another game… his third straight game with the lead… and coughed up the lead.

He did it against the Mets at CitiField in the 8th inning. Ergo part one of his diabolical plot was complete.

He saw that Roy Halladay was rained out in Colorado. Now with the lead wiped out, all he had to do was prevent the Mets from taking the lead, go into the 9th as the pitcher of record and have the Nats score.

And that would give him his 7th win of the season. He would be 7-0… and on his way not only to a 20 win season but also staring Jack Chesbro in the face as he guns for 42 wins this season.

I’ve already broken down his plan!

But the problem is he let the Mets take the lead… and he was saddled with the loss.

He also has 5 blown saves already.

I bet that is more than Jack Chesbro had all year.