The Great Missed Opportunity Series moves on with the most underrated tortured franchise: The San Diego Padres.

It is tough to call people lucky enough to live in the beautiful city of San Diego “tortured.” Perhaps our images of tormented fans goes hand in hand with living in miserable conditions, like Cub fans in the winter or Cleveland or Buffalo fans shoveling snow and grumbling about lost chances.

But as I wrote in this post back in 2010, sportswise San Diego is Cleveland with nicer weather. Between the failures of the Chargers and the rotten luck of the Padres, the only thing consoling San Diegans is the fact that they live in paradise.

The Padres have played in a grand total of two World Series. Both times, they faced an elite all time team. The 1984 Tigers were one of the top squads of that decade. The 1998 Yankees were one of the most complete teams of all time.

San Diego played both of them harder than the final game tallies would indicate. The Tigers and Yankees scrapped for come from behind victories and in the end, the Padres lost 8 of their 9 World Series games.

The only time the Padres have ever won a World Series was in the Gary Coleman made for TV movie The Kid from Left Field.

San Diego has had some great players wear the brown and gold, or whatever color combination they are wearing now.

Dave Winfield played some of his best years there. Tony Gwynn spent his entire career with an SD on his hat. Randy Jones, Gaylord Perry, Mark Davis and Jake Peavy all won Cy Young Awards for the Padres. The late Ken Caminiti won the MVP. Their closers have included Rollie Fingers, Rich Gossage and Trevor Hoffman.

And yet all the talent passing through have not delivered a title.

As per the rules of my series, the Great Missed Opportunity Team has to have played in the Wild Card era and not be a pennant winner.

Rest assured, the Friars gave me plenty of teams to choose from. The 1996 squad stormed into the playoffs by winning the NL West on the last weekend of the season against Los Angeles, only to be swept in three closely played games by St. Louis in the Division Series.

The 2006 Padres looked like a legit pennant contender, but once again lost to a seemingly weaker Cardinals team who would go on to capture the World Series.

And in 2010, San Diego had one of the most surprising teams in all of baseball. They had a 6 1/2 game lead over the Giants in late August and looked to take the West. Then they went on a 10 game losing streak that cut the lead to a single game. They battled with the Giants for the West until San Francisco clinched on the last day. The Padres watched as the Giants won it all.

All of those teams broke Padre fans hearts.

But 2007 was something special. It was cruel, it was unusual and it had a bitter irony in one of its darkest moments.

The 2007 squad was coming off of back to back Division Titles. Granted, the 2005 team was one of the worst playoff teams in history, barely finishing above .500. But that is irrelevant to the fact that they had captured the flag. The 2006 team was solid with the emergence of Adrian Gonzalez, a good rotation and a remarkably deep bullpen led by Trevor Hoffman.

Many of those pieces returned for 2007, but one big name was gone. Manager Bruce Bochy left the team after the 2006 Division Series to take over the fading Giants. Pitching guru Buddy Black took over the managerial reins.

When the 2007 season opened, the Padres exacted a little revenge on their former skipper. Jake Peavy beat newly acquired Barry Zito. Josh Bard collected 4 hits, Adrian Gonzalez drove in a run in the first and the Padres were off and running with a 7-0 win.

The season began uneven, or perhaps too even, for the Friars. They finished April at an even .500, dropping a 17 inning heart breaker to LA towards the end of the month. Every game that got away from San Diego that season would come back to haunt them later.

The Padres were engaged in a razor thin battle with the Dodgers and the upstart Arizona Diamondbacks in the West. The three teams seemed to be hovering within 2 or 3 games of each other all season long.

On May 30th, the Padres were in third place.

On May 31st, they were tied for first place.

On June 1, they were back in third.

The Giants and Rockies seemed to be afterthoughts in the Division. The Rockies would later make the Padres think of many thoughts.

Near midseason, they acquired volatile but talented Milton Bradley from the A’s to give their offense a much needed boost. He joined the team in July and batted .364 in his brief time healthy on the team.

An 11 inning loss to Arizona on August 1 pushed the Padres back 2 1/2 behind the Diamondbacks and in third place, just 2 games ahead of the suddenly dangerous Rockies.

But the Dodgers, who were a mere 1 one game out, began their slide. In house strife and a startling slump sent Los Angeles to a 24-31 record the rest of the way. Meanwhile the Padres won 18 games in August and began to look like a Division Champion again.

Peavy beat the Diamondbacks 11-0 on August 2 and the Padres swept the Giants at home on a pair of walk off extra inning victories and another 1 run game.

It was Peavy again shutting out the Cardinals on August 7th on way to yet another dominant month. He would go 5-0 in his 6 starts, posting a 1.36 ERA in 39 2/3 innings. On August 10th, Josh Bard hit an RBI triple and Kevin Kouzmanoff homered in a wild 11th inning in Cincinnati to give the Padres another win to keep pace with Arizona.

On August 14th, Greg Maddux beat the Rockies and seemingly help put them at arms length as the Division remained a modest winning streak away.

The Diamondbacks came into Petco for a 4 game showdown in the end of August. The first game, Peavy was magnificent, striking out 11 in 7 innings and letting up just 3 hits as the Padres won 3-1, thanks to a 2 run homer by Geoff Blum. San Diego won 3 of the 4 games.

Neither team would make the playoffs.

Soon the Diamondbacks would overtake the Padres again. But San Diego went on a seven game winning streak in mid September, usually a sign that a team is making a final push to the post season. 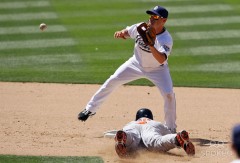 The Rockies entered San Diego on September 21. The Rockies had won their last 5. The Padres had won their last seven games and had Peavy on the mound and a four game advantage in the standings with 10 games to play. A series win would put the upstart Rockies away and still give the Padres a shot at the Division which was only 1/2 a game away from them.

Peavy was up to the task, pitching 7 innings of 3 hit ball. But Franklin Morales pitched 6 shutout innings, letting up a single hit. The Rockies took a 1-0 lead into the 9th when Adrian Gonzalez homered to tie the game and send it into extra innings.

In the 12th, Michael Barrett hit a deep drive with a runner on second that was caught. Had it dropped, the Padres would have won. They stranded 2 in scoring position that inning. They would lose on a Brad Hawpe 2 out 14th inning homer.

The Rockies would wind up sweeping the series, pulling within 1 game of San Diego. And to make matters worse, Milton Bradley tore his right ACL in the finale. He would be lost for the season, tearing it while screaming at an umpire.

They righted their ship with a 4 game winning streak. In Milwaukee, they clinched at least a tie for the Wild Card and still remained a mere game out of first place. On Saturday, September 29th, the Padres had a chance to clinch a playoff spot.

Up 3-2 in the 9th with 2 outs and 1 on, Trevor Hoffman, the second most loved Padre of all time, faced Tony Gwynn Jr., the son of the most love Padre.

With two strikes on Gwynn, Hoffman was a pitch away from sending the Padres into a first place tie, a clinched playoff spot and eliminating the Rockies to obscurity.

Instead Gwynn tripled home the tying run. Vinny Rottino would single home the winning run in extra innings. The Padres lost the season finale to the Brewers and the Rockies won yet again, forcing a one game Wild Card showdown.

Peavy would start for the Padres in Coors Field, hardly a pitcher’s friend. The Rockies jumped on him early and Yorvit Torrealba homered to give Colorado a 3-0 advantage. But then the Padres bats took advantage of the thin air.

Adrian Gonzalez crushed a grand slam and the Padres were ahead. Todd Helton responded with a Rockies homer and it looked like the slug fest was on.

The Rockies took a lead into the 8th but Brian Giles tied the game with a double. The two teams locked antlers and sent the one game playoff into extra innings. Both teams stranded runners in scoring position along the way.

Finally in the 13th inning, Scott Hairston launched a 2 run homer. In the second time in 3 days, the Padres were three outs from the post season with Trevor Hoffman on the mound. The Rockies remarkable run looked like it was doomed.

But Hoffman let up back to back doubles to Kaz Matsui and Troy Tulowitzki, suddenly turning it into a one run game with the winning run at the plate. Matt Holliday tripled home the tying run. Now the Padres faced elimination at third base with nobody on. 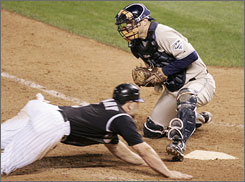 Jamey Carroll flew out to right and Holliday scored (whether or not he touched home is up for debate.) The Padres season was finished.

With no Mets, Dodgers nor Padres in the post season, the Rockies steamrolled to the World Series, sweeping both the Phillies and Diamondbacks for the pennant.

The Padres could only sit back and watch. Those extra inning losses, the Bradley injury, the loss in Milwaukee all came back to haunt San Diego.

That series should never have even seen that one game playoff against the Rockies. A single win at PetCo Park would have placed the miraculous “Rocktober” run in Colorado to obscurity.

A team led by the eventual Cy Young winner Jake Peavy might have fared well against the Phillies, coming off a miracle run of their own after dispatching the mighty Mets. Maybe the Padres could have fought all the way and won a pennant and put up a better fight than the Rockies against the Red Sox.

The cruel irony of the son of San Diego’s favorite son sinking the Padres’ heart is borderline crippling. The Padres reverted to their losing way for every season afterwards save for the 2010 run.

Peavy, Gonzalez and Heath Bell would all go on to other teams as they broke up what looked like a promising perennial contender.

Instead misery continued in San Diego, the kind of misery that only living in perfect weather by the Pacific Ocean can cure. There by the surf fans can grumble and think of the great missed opportunities, like the 2007 Padres.