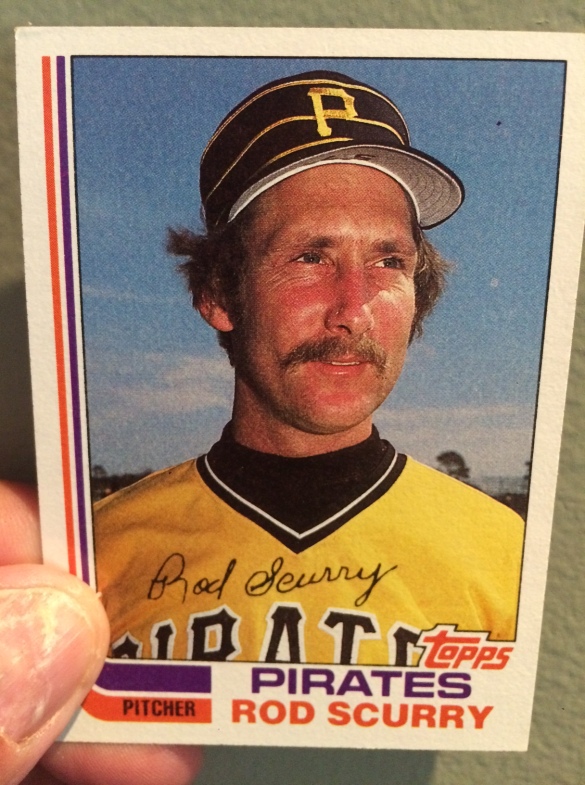 I always felt badly for players who showed up a year too late for a team. When a club went on a great run and then a dry period shows up, inevitably there is someone who makes their debut as the good feeling of the title lingers but the losing has begun.

That is Rod Scurry. He showed up at the wrong time and saw his life end in a strange manner.

When you look at him in this Topps card, he is all dressed up to be part of the great Pirate teams of the 1970’s. He has the flat cap, the yellow jersey and a classic ballplayer mustache.

Hell, I wouldn’t be surprised if he was humming “We Are Family” while this picture was being taken.

He worked his way up through the Pirates farm, making stops in Triple A Columbus and Portland in 1977, 1978 and 1979 but never getting the call to the majors.

The call came on April 17, 1980. He made his big league debut against the St. Louis Cardinals as a member of the defending World Champions.

There were plenty of players left over from the Family of 1979. John Candelaria was the starting pitcher. Enrique Romo, Dave Roberts and Kent Tekulve all pitched in that post season and in Scurry’s debut.

Willie Stargell had the day off, but he was on the team as well and played in Scurry’s second game. Bert Blyleven and Don Robinson were also still there.

It seemed like Scurry was practically the only player without a ring on the squad. A repeat was not in the cards for Pittsburgh. They won 83 games and finished far behind the Phillies and Expos in the NL East.

Interest in the sliding scandal ridden team plummeted and they nearly moved to Denver. Scurry missed The Family but was there in time for the drug trials.

As with many of the players in the drug trials, the Pirates dumped Scurry after the 1985 season. The Yankees purchased his contract and he did not do badly as a middle reliever for manager Lou Piniella in 1986.

Between 1987 and 1989 he bounced between the Yankees, Mariners and Giants systems, pitching 39 games for the 1988 Seattle squad and then his career ended.

Clearly his demons and addictions did not end with his playing career nor with his testimony in the Pittsburgh drug trials. When the Mariners cut him, he was arrested for buying crack in Nevada.

At his Nevada home in October of 1992, not long after Francisco Cabrera sunk the Pirates in the playoffs, Scurry was found being violent in his yard. He was screaming that snakes were all over him. Eventually he stopped breathing and died a week later in the hospital.

It was a sad ending to a life of bad timing and demonized addiction. Had he played a little earlier, who knows what trajectory his life would have gone on?