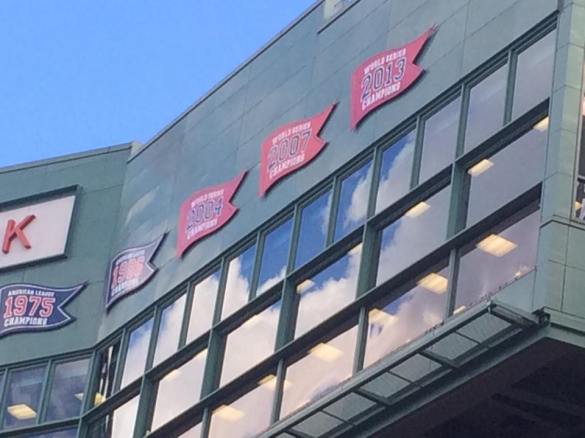 When I last visited Fenway in 2016, I took a moment to admire the pennant and World Series title display over the pressbox.

I had not been to Fenway Park since 2002. Then, the most recent trip to the World Series was 1986, which didn’t end well.

I couldn’t see the Red Sox winning a single pennant, much less a World Series then.

So looking at those 3 red flags was special. Not only could I say “I’ve seen them win in my lifetime” but I could arrange them as Gold, Silver and Bronze.

Now I am greedy. I want one Red Sox World Series title to not even get a medal. 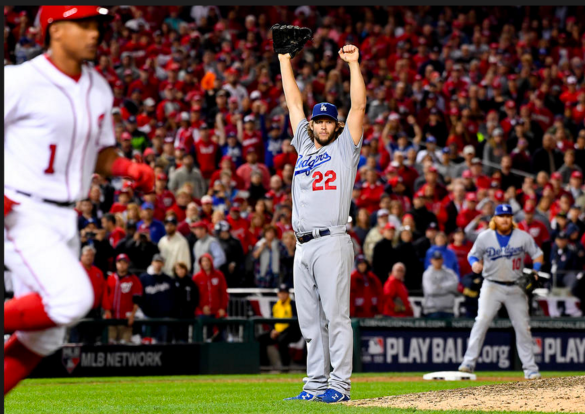 It is Clayton Kershaw’s birthday. It may be unfair that some of his post season failures hang over his head, but baseball isn’t always fair.

Meanwhile it is the 100th anniversary of the Red Sox 1918 World Series title. I can not tell you how wonderful it is to never think about that year again as a Red Sox fan.

Dealing with ghosts, real or not, on this episode of Sully Baseball.

END_OF_DOCUMENT_TOKEN_TO_BE_REPLACED 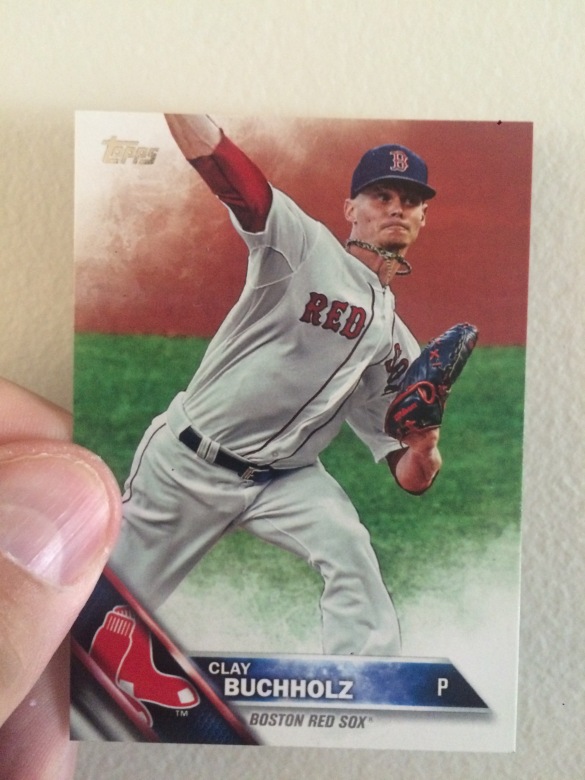 Clay Buchholz. Say that name to a Red Sox fan and chances are there might be a shake of the head or a sense of disappointment.

Few players in recent memory teased Red Sox fans more than Clay Buchholz, whose greatness was never quite realized and whose inconsistencies and injury history drove us Red Sox fans to drink.

And he also represents exactly how all Red Sox fandom has changed since 2004.

As of this writing, Buchholz is a member of the Phillies organization but is, SURPRISE, on the Disabled List after going through surgery on his pitching arm. He may recover and be brilliant elsewhere. He might evolve into a nice middle reliever. Or his career might be over.

Any one of those scenarios is probably even money.

To be fair, there was always a Nuke LaLoosh quality to him. The Texas native had a great arm but did dumb stuff as a kid. He was kicked off the McNeese State University team after he and his friends stole computers from a local middle school to sell them on campus.

Folks… that is stupid.

The Red Sox used one of the picks they got from the Mets after losing Pedro Martinez in 2005 to draft Buchholz. And in that we can see a perfect piece of symbolism for Clay Buchholz in Boston.

Pedro Martinez was brought in to be the savior and deliver a title to Boston. While he was no longer the superstar he was in 1998-2002, Martinez was still solid and won Game 3 of the World Series. The Curse was lifted. Martinez was the Hall of Fame face of the changing of Red Sox fandom forever. Our last image of him as a Red Sox pitcher was winning that Game 3 in St. Louis.

And Buchholz was a face for the post 2004 reality. There was great promise in that draft for the Red Sox. Jacoby Ellsbury and Buchholz were selected in that first round. As was 2008 postseason hero Jed Lowrie. (Craig Hansen and Michael Bowden were also picked but did not live up to the hype.)

Between 2005 and 2007, Buchholz excelled at every level of the minors, striking out more than a batter per inning, keeping his ERA low and piling up the wins. There was a promise for a 1-2 home grown ace pitcher combination of Jon Lester and Clay Buchholz who would lead the Red Sox to a second title with more homegrown talent.

Jon Lester made his debut on the 2006 and became a beloved Red Sox pitcher almost right away with how he dealt with his cancer and pitching well out of the gate.

In 2007, with Lester joining Josh Beckett in a solid Red Sox rotation, Buchholz was tearing up Pawtucket and making Red Sox fans wonder if he would be joining the team soon.

He made a spot start in August where he pitched well over 6 strong innings. But the Red Sox, still in first place, were starting to slip and the Yankees were right on their heels.

Entering September, the Red Sox were stumbling and needed a big win to turn their fortunes around. Buchholz got the ball against the lowly Orioles and had an entire organization checking his pitch count.

He dominated the Orioles that night, and saw his pitch total get higher and higher. Yet there was no way he could be pulled. The HIT column remained at zero. The Red Sox ran up the score to 10-0 and with his pitch total at triple digits, Buchholz took the mound for the 9th. He got all three outs and completed the no hitter. He joined Bobo Holloman and Wilson Alvarez as the only pitchers in MLB history to throw a no hitter in one of the first two starts of their career.

Red Sox fans were elated. They had another home grown ace. The Red Sox were going to dominate for the foreseeable future with Beckett, Lester and Buchholz leading the way. Even the disappointing Daisuke Matsuzaka could be pushed to the number 4 slot.

After the game, the organization wondered what to do about his young arm. He experienced shoulder fatigue and Theo Epstein and company elected to shut him down and not put him on the post season roster.

Buchholz got his World Series ring and the Red Sox didn’t look back after that glorious night in September. With the championship won, the promise of a rested and ready Buchholz for 2008 deemed well for hopes of a repeat.

Instead Buchholz was hurt for much of 2008 and the few times he was on the Boston roster, he was not effective. Thus the tease. The Red Sox made it back to the ALCS, mainly because Dice-K had an excellent season and Lester emerged as an ace. They could have used one more solid starting pitcher to beat the Rays in the playoffs. They could have used 2007 Buchholz.

In 2009, Buchholz was in the minors as the Red Sox struggled with the Yankees and pushed to get back into the post season. Tim Wakefield, Jon Lester and Josh Beckett all started the season well but Wakes and Beckett had poor second halves. Dice-K flopped as did new comer Brad Penny.

Buchholz was summoned to pitch the second half in Boston and was adequate and he made a post season start in the Division Series loss to the Angels.

Then in 2010, Buchholz had an outstanding first half, going 10-4 and posting a 2.45 ERA. He was selected to the All Star team and Red Sox fans were reminded of the brilliance hinted at that night in 2007. After all, Buchholz was only 25 in 2010 and maybe now had turned the corner.

The team went into 2011 with Lester, Beckett, John Lackey and Buchholz promising to have the best rotation in the American League. They added Adrian Gonzalez and Carl Crawford to a team that looked to steamroll their way to the title. Buchholz was rewarded with a $30 million contract extension, which no doubt prevented him from stealing more computers from middle schools.

2011 was a disaster for the Red Sox and Buchholz, who missed most of the season with a stress fracture in his back. The rest of the pitching staff was pounding beers and fried chicken as the the rotation collapsed down the stretch and lost their playoff spot on the final day of the season.

Buchholz came back to win 11 games in the awful 2012 campaign but was a symbol of lost potential in Boston. He was unreliable, always hurt and made Red Sox fans mutter about his million dollar arm and ten cent head, to paraphrase Crash Davis.

Then 2013 caught everyone off guard. Buchholz finished April 5-0 and nearly threw another no hitter. He won his first 9 decisions and made the All Star team for the second time. His outstanding first half helped propel a surprising Sox team to the top of the standings. Injuries cropped up in the second half, but Boston’s division title was helped by Buchholz’s 12-1 record and 1.74 ERA. THERE was the ace we were looking for!

This time he was on the World Series roster and while he didn’t win a game, he started the critical Game 4 and allowed no earned runs over his 4 innings on the mound.

Once again, injuries and inconsistencies trashed his 2014 and 2015 seasons and he was moved to the bullpen for a while in 2016 before making a losing start in the Division Series against Cleveland.

His time in Boston ended with that playoff loss and he signed with the Phillies where he has so far had only 2 disastrous starts.

But like an impressionist painting, take a step back and consider what I just described. This player, who has been a source of never ending frustration for Boston fans, has a resume that would have been incomprehensible to Red Sox nation prior to the moment that Dave Roberts stole that base.

Imagine if I told that fan, slumped in their chair, wondering if they will EVER experience a World Series title, that the Red Sox would draft a player, a home grown pitcher, who would pitch 10 seasons in Boston, make a pair of All Star teams, throw a no hitter late in the season where the Red Sox would win the World Series and go 12-1 with a sub 2 ERA on a SECOND World Series winner.

That fan would assume that Clay Buchholz was having a statue made in his honor, his number retired and perhaps the town of Chelmsford Massachusetts was drafting a proposal to rename themselves Clay Buchholzville.

Instead this is how our mindsets have changed. The pitcher that was drafted with one of the Pedro Martinez picks has entered a strange new world where no hitters, individual great seasons and multiple World Series titles no longer equal a lifetime pass of goodwill.

It is a strange world. And with that in mind, THIS Red Sox fan salutes Buccholz for all he did, his two rings and shrugs at his bad timing.