It may be difficult to predict who becomes a post season hero. But one thing is certain… he will be picked up under the radar during the season by the San Francisco Giants.

It is a waiver wire pick up episode of The Sully Baseball Daily Podcast.

END_OF_DOCUMENT_TOKEN_TO_BE_REPLACED 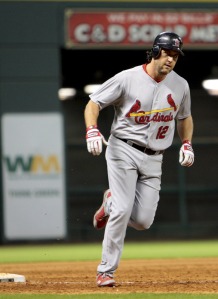 In the last few years, Lance Berkman’s stats have been falling off. He was a part time player for the Yankees in the playoffs last year, pressed into starting duty after Mark Teixeira’s injury.

Well now he is in St. Louis and is putting up All Star numbers again.

Among the leaders in batting, he knocked his 15th homer tonight and drove in his 45th run.

It’s a terrific comeback.
Tony LaRussa has had a lot of players comeback for him.

But there have been other kind of comebacks.

The Mark McGwire comebacks… the lots of players who played for him being connected to stuff kind of comebacks.

Remember how quickly the Rick Ankiel story turned from the feel good baseball story of the decade to “Oh dear…”?

I so hope this is a NICE comeback on a LaRussa squad. But my guard is up.

There’s a great scene in Superman 2 that I will spoil here.
If you haven’t seen the movie… it came out nearly 30 years ago. Take your time.

In the scene, the evil Kryptonians led by General Zod have been obsessing over one thing: Capturing and defeating Superman.

And when they cornered him in the Fortress of Solitude, Superman was forced to go into that chamber that takes all of his powers away. When he was in there, Lois Lane was crying, Zod and his two lackies were smiling knowing that they were about to win. 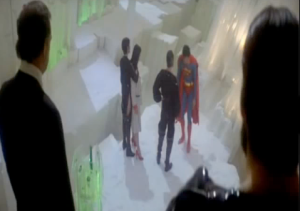 And Lex Luthor, brilliantly played by Gene Hackman, was looking around puzzled. There was something odd happening and he was the only person who noticed (being the smartest character in the movie.)

When Superman came out of the chamber, Zod thought he had won. But actually Superman had reversed the process and all the evil Kryptonians were powerless and Superman crushed General Zod’s hand in a moment that made a 10 year old Sully jump up and start cheering and STILL gives this 38 year old Sully goose bumps.

So why the hell am I going over that scene?
Beyond the fact that it is awesome… it kind of reminds me of the Yankees pursuit of Cliff Lee.

The Yankees have been obsessing over Lee since the 2009 World Series when he handed them their only 2 losses. And then this year, it looked like the Yankees were going to pry him loose from the Mariners… only to be outfoxed by the Rangers and have it haunt them in the ALCS when Texas and Lee man handled them for the pennant.

(Jesus Montero, the prospect the Yankees wouldn’t part with to get Lee, had better turn out to be good!)

But now in the open market, it is assumed he will leave Texas for New York. Even Nolan Ryan thinks so.

So in this scenario, Cliff Lee is Superman and the Yankees are of course Zod.

Superman is about to kneel and swear his loyalty to Zod and the Yankees.

Lois Lane, crying, would be the Rangers… and frankly the rest of baseball seeing the Yankees get what they want.

In this one?
I’M Lex Luthor looking around, noticing something is wrong.

First of all, if the Yankees are looking to give Lee a seven year deal like they gave Lee’s former teammate C. C. Sabathia… that is assuming he will be a premium pitcher in his late 30s.

That’s not always a safe bet. Cy Young candidates can break down in an awful hurry. Don’t believe me?

3 years later you could get all five for a six pack of Sprite.

And before you think I am being just a gloomy glass is half empty guy, remember that at at age 31, he was having back issues.

His numbers in Texas were good but hardly the stellar stats he was piling up on a dreadful Seattle team.

Remember his stretch in mid August when he was getting clobbered?

Do things like “bad backs” tend to get better with age? If he was with the Yankees, he would probably turn to Andy Pettite and ask “Hey, when your back was messed up in your 30s, what did you use?”

And Pettite would reply “Sorry man, they test for that stuff now.”

Imagine if injuries catch up with him like those 2007 Cy Young candidates. Isn’t a bad back a red flag?

And of course there is the New York factor.
He needs to come up bigger than Clark Kent’s alter ego in order to justify a huge contract.

Now Sabathia came up bigger than his waist size when he arrived in 2009. He won the ALCS MVP and looks like he’ll be an ace stud for years to come.

He’s been the exception.

It’s easy to think of Kevin Brown as being the hot head, hand breaking bust blowing Game 7 of the 2004 ALCS.

But remember when the Yankees acquired him, he was a stud who was coming off a solid year with the Dodgers and was going to take Roger Clemens spot in the rotation. I still can hear Charlie Steiner describing him as “a warrior.”

Think his heroics in the 1997 NLCS and 1998 post season earned him any good will in New York?

How do you think Cliff Lee’s Game 1 World Series clubbing this year would have gone over in New York?

How did A. J. Burnett fare? He won the GIGANTIC Game 2 of the 2009 World Series… and that bought him good will for almost 45 minutes.

And if Cliff Lee might not be a fit in New York, there’s the question of New York not being the right fit for Cliff Lee.

Sometimes those warning signs of a guy not wanting to play in the big spotlight are not unfounded.

How did Randy Johnson, one of the best pitchers of the last quarter century, do in New York? He was miserable before he threw his first pitch.

Even the great Johan Santana has lost some of his luster since arriving in Queens.

And then there is the bizarre contract circus that’s going on in New York.

With Prince Hank sounding off and the team playing the contract haggling with Mariano Rivera and Derek Jeter in public, the once stable Yankee organization is slowly looking more and more like the old Bronx Zoo… remember the one where they kept signing big players and couldn’t make the playoffs.

And I know this is sacrilege to say, but if things don’t go well in the free agent season are the Yankees as big a lock to win a World Series as they used to be?

A team where Rivera isn’t there… or only signed for a year?
A team where the veterans are tied up to huge unmovable contracts as they are rewarded for past seasons (when they ALSO made big bucks)?

And remember, this team is getting older and their young players aren’t exactly challenging the veterans for playing time.

If their young players were any good, they would have been able to TRADE for Lee in the regular season.

So yeah, Cliff Lee is Superman this off season… but there is ample Kryptonite out there.

The Yankees might very well end up with a crushed hand.

And before any gives me grief for comparing the Yankees to evil General Zod, remember that in this scenario, I’M Lex Luthor!