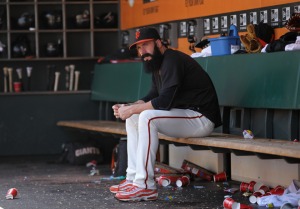 7 games back.
Losing 2 must win games.
Scoring a grand total of 3 runs in the final 2 games.
It looked like a magical repeat season was going to happen in San Francisco, but I suppose it was the Law of Averages kicking in.
All of those walk off wins and 3-2 nail biters went their way all through 2010 and the first four months of this season. Now they broke the other way.
This team isn’t going to make up 7 games. That’s a week of games with 3 weeks to play.
Best keep this core together, let Beltran go and hope Posey is back and can hit in 2012.
Anyone who had the Diamondbacks winning the west, I want to hear from you.