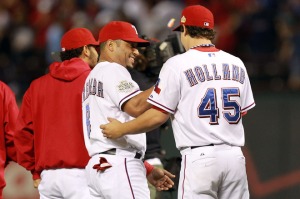 Derek Holland pitched into the 9th inning tonight.
For most teams that would be unthinkable. After 7, you automatically take the pitcher out.

But these are the Rangers and they actually look at what is happening on the FIELD to make decisions. He was cruising and there was no reason to wake up the Cardinals offense. Remember St. Louis scored 16 runs the night before… a good deal of that against the Texas bullpen.

So why take out the pitcher?

So Holland made sure the bullpen pitched less than an inning tonight.
And for the first time since 2003, a World Series is tied at 2 games a piece.

It’s been 9 years since the World Series has gone 7 games.

A thrilling 7 game series with a tremendous finale could go a long way to help baseball nationally.

For the good of baseball, hope St. Louis and Texas split the next two games. There are kids getting their driver’s license who don’t remember watching a seventh game of the World Series.

Time for that to change.
And time to thank Derek Holland.