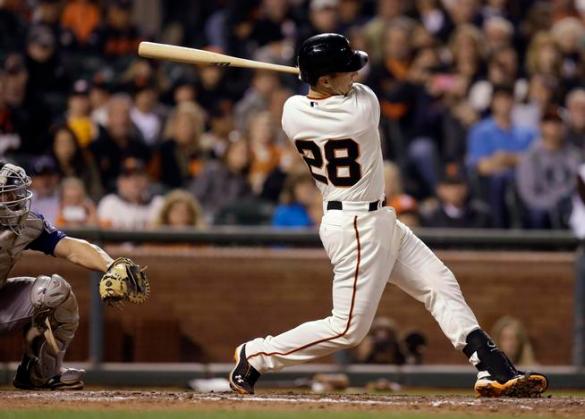 Seriously, I hope you didn’t decide tonight was the night you were going to catch up on shows piling up on your DVR or go to the movies or spend time with your family. That would have been a TERRIBLE choice tonight.

For baseball fans in the San Francisco Bay Area, this was a night to watch the games from start to finish.

Sure the A’s and the Giants were playing crappy teams (the Astros and the Rockies respectively) but they also have had heartbreaking losses to them recently. And tonight was a night when both teams would give their fans of roller coaster ride of runners left on base, late innings collapses and 9th inning triumphs.

The Giants saw a great Tim Hudson performance that featured a go ahead hit by Buster Posey get squandered in the 9th. Once again it was “Mr Break Up The Perfect Game” Justin Morneau who was the culprit.

Oh never mind, Posey would just win the game with a 2 out bottom of the 9th homer.

And while the A’s stranded about 48 men over the first 5 innings, they would go into the 9th trailing the Astros. Relax, have you SEEN Houston’s bullpen.

The A’s tied it up and untied it with Sam Fuld (???) clobbering a go ahead over.

Dan Otero now has 8 wins out of the bullpen… a classic vulture.

Things are getting good by The Bay. Just don’t turn the game off!

Sam Fuld’s homer in the 9th gave the A’s a 5-4 come from behind win in Houston. DODGED BULLER

Buster Posey’s walk off shot in the bottom of the 9th made up for Casilla’s blown save as the Giants topped Colorado, 4-2. DODGED BULLET

The Blue Jays scored 4 runs in the 7th, 3 on Danny Valencia’s homer, and the Red Sox squandered a good Joe Kelly start by losing 5-2. TEETH GRINDER

Tomorrow the A’s and Angels square off. It is getting serious now!